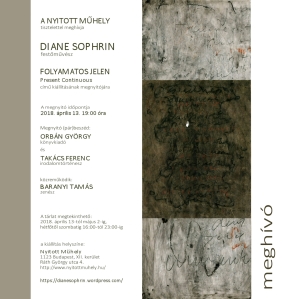 Diane Sophrin’s latest solo exhibition at the Open Workshop / Nyitott Műhely opened on April 13th and ran through May 15th. 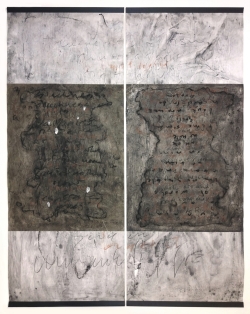 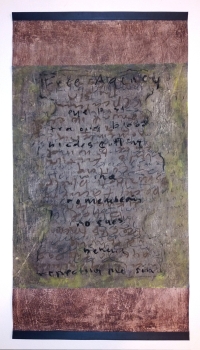 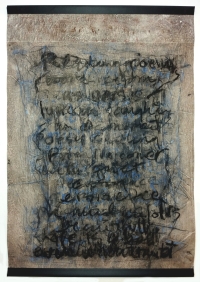 A dense body of work created over the hard winter of 2017 – 2018, the Present Continuous / Folyamatos jelen series relies on poems written in tandem with the making of the visual pieces. The list of linked poems can be found here. For a detailed description of the entire project, including paintings and poems, click here.

The opening was a stimulating mix of Diane Sophrin’s visual work and verse, a musical performance by Tamás Baranyi, cofounder of world music band Anu Mauri,  and a substantive and lively panel discussion between György Orbán, publisher and Ferenc Takács, literary historian.

The event began with Tamás performing his own compositions on the Persian Santur. Among them was a new piece written expressly for the exhibition using text of Sophrin’s verse Desperate Ones.

Poetry came next, with Diane reading two of her poems, which were then recited in Hungarian translation by György and Ferenc: Miracles / Csodak and  Doubt / Kételkedni. The Párbeszéd or dialog between György and Ferenc followed, with participation from the audience. 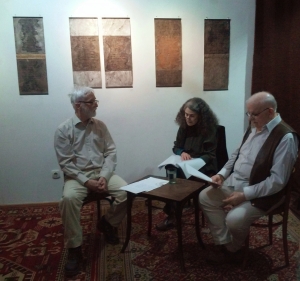 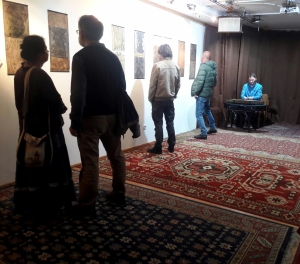 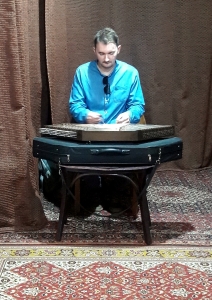 My deepest appreciation goes to to Tamás, Gyuri and Feri for their positive support, gracious and creative participation in this event, as well as their generous feats of translation! Warm thanks to Kováts Albert, president of the Society of Hungarian Painters / Magyar Festők Társasága http://www.magyarfesteszet.hu/en, for his help in arranging this exhibit. Finally, I’d like to express my gratitude to Finta Laci, Director of the Open Workshop / Nyitott Műhely for his kindness and tremendous dedication to a wonderful creative and intellectual meeting place!