So, we arrived in Budapest this past Sunday afternoon, after a smooth and easy 23-hour trip, door-to-door. The psychology of travel is curious. Maybe the trip was so easy because we were retracing our steps so soon after our previous trans-Atlantic leap; it was only three months ago that we had traveled in the opposite direction. At any rate, this trip was the fastest 23 hours of 21st century air travel that I can recall.

The smooth connections continued once arriving in Hungary. We spent the first night with good friends in the seventh district. As always in Central Europe, there is an oppositional simultaneity of time and experience (past/present; good/bad) not so very palpable back in the States.

Attached is a photo which I shot upon rising refreshed after a good night’s rest – looking out our friends’ window onto Szenes Hannah Park a bit down the street. I’ve walked by this tiny triangular city park in the past and have taken my own photos, but can only offer you some online images at the moment. A large stone engraved with Szenes’ own words shares the intimate, green space with an earlier anti-Fascist sculpture of the socialist era (that famous sculpture has its own story): 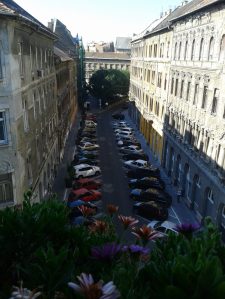 For those of you who don’t know who Hannah Szenes was or what she did, here is a brief summary from Wikipedia:

Hannah Szenes (often anglicized as Hannah Senesh or Chanah Senesh; Hebrew: חנה סנש; Hungarian: Szenes Anikó; July 17, 1921 – November 7, 1944) was a Special Operations Executive (SOE) paratrooper. She was one of 37 Jewish parachutists of Mandate Palestine parachuted by the British Army into Yugoslavia during the Second World War to assist in the rescue of Hungarian Jews about to be deported to the German death camp at Auschwitz.
Szenes was arrested at the Hungarian border, then imprisoned and tortured, but refused to reveal details of her mission. She was eventually tried and executed by firing squad. She is regarded as a national heroine in Israel, where her poetry is widely known and the headquarters of the Zionist youth movements Israel Hatzeira, a kibbutz and several streets are named after her.

Monday morning after breakfast, we were met at the door and taken by van to Bernecebaráti, a tiny agricultural village of orchards and fruit trees (perhaps more on that another time) north of the Danube bend, along the Hungarian/Slovak border. We’ll be here for two weeks before returning to Budapest. I’ve been at the Bernecebaráti Art Colony twice before. It’s run by the government of the fifteenth district of Budapest, and the director of the colony is Nagy Elöd, a dear friend and an excellent painter.

In past years there was not much email or cell phone accessibility here in the village, and none in facilities of the colony itself. I almost relished the disconnect. This year I was surprised (pleased? disappointed?) to find that the art camp has acquired 21st century communication. OK, easier to write to everyone, but that amazing psychological quietude has been cracked open.

Now to post this brief entry. More to come!